In part 1 of this series, we investigated containerizing the JSS headless mode host. But there are some issues with that basic implementation:

So, let’s fix this by using a build container to create a standardized build environment where we can make our server bundle. Basically, 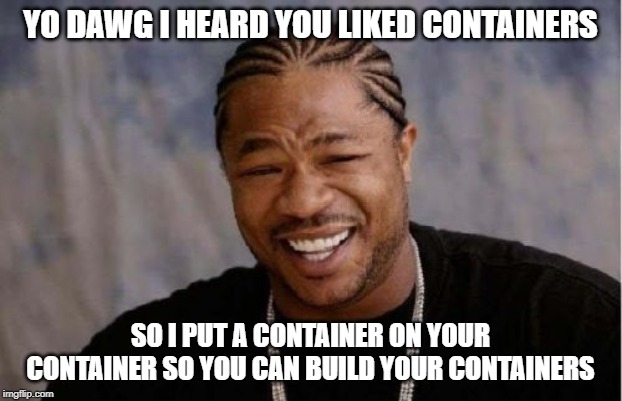 When a Dockerfile executes, the state of each intermediate step is stored so that it need not be repeated every time the image rebuilds. But more importantly, you can also create intermediate build containers that live only long enough to perform a build step, then get thrown away except for some artifacts you want to persist on to some future part of the container build. In the case of our JSS image, the idea is something like this:

The build container that we use to build the JSS app in is thrown away after the build occurs, leaving only the lightweight production container with its artifacts. In this case, thanks to switching from node:lts to node:lts-alpine as the base container, the built container size shrunk from 921MB to 93MB.

Note that because the base image is stored as a diff, the image size reduction affects the initial download time of the image on a new host, but once the node:lts image is cached it really only changes the amount of static disk space consumed.

Adding a build container step involves adding a few lines to the top of the Dockerfile from part 1:

To solve the issue of the Sitecore API URL and API Key being baked into the server and browser bundles by webpack during jss build, we need to use tokenization. These values really do need to be baked into the file at some point, because the browser that executes them does not understand environment variables on your server or how to replace them - but, we should not need to re-run webpack every time a container starts up either.

We can work around this by baking specific, well-known tokens into the bundle files and then expanding those tokens when the container starts from environment variable values. The approach works something like this:

Doing this is a bit harder than just doing the build container. First, during the container build in the Dockerfile:

With the updated Dockerfile in place, the container we build will now have .base files ready to specialize into the running configuration when the container starts up. But without any changes to the image itself, it would fail because we can’t run an app using .base files! So we need to add a little script to the node-headless-ssr-proxy to perform this specialization when it starts up inside a container. The specialization process:

I used bootstrap.sh for the script name, but any name is fine.

This script is a rather hard to read one-liner so let’s piece it out to understand it:

Finally we need to get this script to run each time the container starts up. There are several ways we could do this, but I elected to add an npm script to the headless proxy’s package.json:

…and then changed the entry point in the Dockerfile to call the container entrypoint:

The final step is to rebuild the container image so we can start it up, using docker build.

The headless proxy Node app has always known how to read environment variables for the Sitecore API host and API key, but those have only applied to the SSR execution not the browser-side execution. With the modifications we’ve made, setting those same environment variables will now also apply to the browser. Doing this with Docker is quite trivial when booting the container, for example:

For more clarity, here’s the full contents of the Dockerfile with all these changes made:

In this episode, we have improved the JSS headless container build process by running all of the build inside containers for improved repeatability and tokenized the browser JS bundles so that the same container can be deployed to many environments with different API hosts without needing a rebuild. What’s next? Orchestrating multiple instances with Kubernetes.