A couple years ago Alex Shyba told me about an idea he had: what if we used a data provider to map serialized items directly into the content tree, bypassing the database and eliminating the need to sync? I was like

I went nuts and wrote a prototype that did exactly that.

The prototype, nicknamed Rhino because it has a prominent horn like certain other mythical beasts, actually worked fairly well. Unfortunately there are two hard problems in computer science: naming, cache invalidation, and off by one errors. Cache invalidation, specifically using the FileSystemWatcher to observe file changes by source control, was unreliable. Because of how core serialization is to Sitecore development practice, unreliability is not acceptable. Reluctantly, I shelved Rhino and worked on Unicorn 2 instead.

The idea of Rhino stuck around. The improvements brought around in Rainbow, such as partial item reading and tighter control around storage, enabled working around the limitations that had precluded Rhino from being useful in production. Thus the idea returns as Transparent Sync, which might just be the best part of Unicorn 3.

Transparent Sync enables Unicorn to sync serialized items in real time, completely automatically. It does this by using its data provider to directly read the serialized items and inject them into the Sitecore content tree. The items on disk are the items in Sitecore: it bypasses the database entirely for transparently synced items. Changes made on disk update nearly instantly in the Sitecore editing interfaces.

Imagine a scenario where a development team is working with a feature-branch driven workflow, like GitHub Flow. In order to perform a code review when using Transparent Sync, you merely checkout the feature branch under review and your Sitecore is immediately configured with the items that the feature includes. 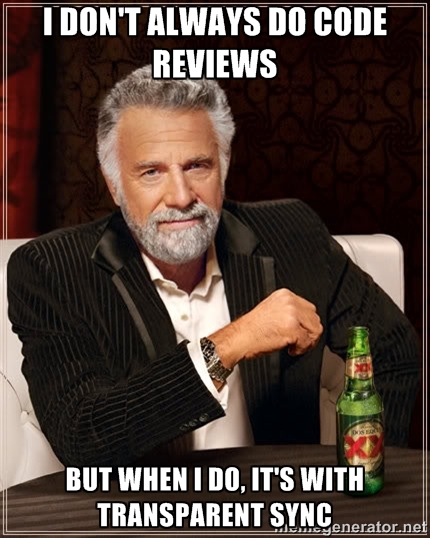 When should we use Transparent Sync?

Transparent Sync is turned off by default because you should understand how it works before enabling it.

Transparent Sync is excellent for development artifacts like templates and rendering items, but it’s inappropriate if you’ve got hundreds of thousands of content items. At startup Unicorn must build an index of metadata, which involves reading the headers of each serialized file. If you have a SSD this penalty is pretty minimal, but a traditional hard drive not so much. In testing I enabled transparent sync for the whole default core and master database (19,228 items) using a SSD and noted about 100ms increase in startup times on average.

Because Transparent Sync bypasses the normal sync process, transparent sync also bypasses anything that is hooked to sync. This would include things like custom evaluators (like NewItemsOnlyEvaluator) and the sync event pipelines. If you are relying on these customizations, turn transparent sync off for the configurations that use them.

How do we use Transparent Sync?

Note: you must perform an initial serialization of a configuration with Transparent Sync off before you enable it. Otherwise the items in the configuration will seem to disappear as transparent sync shows all zero items that are on disk!

You can also change the setting in the global <defaults> if you want to change the default setting of transparent sync for all configurations.

Once Transparent Sync is enabled all you have to do is change items on disk and the updates will immediately appear within Sitecore.

What happens if I reserialize a Transparent Sync configuration?

There are warnings in the control panel if you reserialize a Transparent Sync configuration.

I hope you have as much fun with Transparent Sync as I had making it!